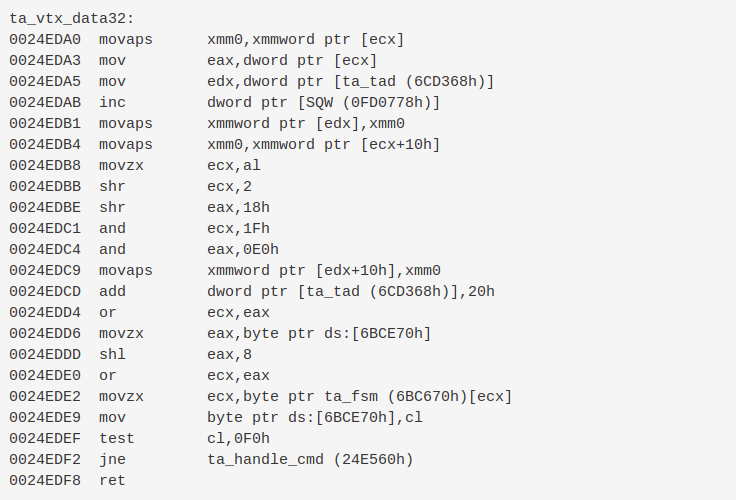 Today I finally had some time to get back to reicast / dreamcast emulation / open source stuff.

I was playing around inolen’s redream project. Performance was bad so I dived into profiling. It turns out redream was miscalculating the fastmem compile flag.

The code had a few “warning” signs (the use of F64 and %) but I assumed a “modern, smart compiler” will be able to optimize these. It turns out that the generated assembly is quite bad.

At the same time, pcw.obj_ctrl % 32 compiles to

My naive thinking was that “% power-of-two” is the same as “& (power-of-two -1)”. I often use % over & because of the easier to read constants. However, this is only valid for unsigned integers. For signed integers, remainder calculation is slightly more involved. Even though obj_ctrl is declared as u8 and can never be negative, it is promoted to an integer before performing the calculation. And integer is signed. The compiler could keep track of the conversions/range of the intermediate integer and generate simpler code, but it didn’t.

This also can be inferred from the assembly. movzx eax,al guarantees that the top 24-bits are zero. Based on the truth table of the and operator and ecx,8000001Fh will never set bit 31 to a non-zero value. Thus, it can be substituted with and ecx,1Fh. Also, the S flag will never be set, so jns will always be taken.

Changing the code to

fixes the x87 use, the stack spill and the remainder calculation. This code more than two times faster! It improves overall performance by 12% on the test scene. It can be further improved as memcpy compiles to

… which is still not optimal.

Nice clean avx memory copy. Also note that ta_tad.thd_data += 32; was moved after the data copy. This saves a register and avoids spilling esi to the stack. This is much faster than the memcpy version, boosting overall perf by another 13%. The epilogue could be better. Also, avx is compact, but 256-bit ops are not portable. They are also slower when mixed with non-avx code.

Helping the compiler a bit more by (a) making state_in u32 so that ta_handle_cmd can be directly tail-jumped, reordering the branch also helps

On the limited test scene, we went from 170-ish fps to 225ish. This is a HUGE 32% performance increase just from editing a few lines. I haven’t looked yet at the generated arm code, but it is plausible this gains 3-4% for the arm side as well (ported to NEON ofc). Funny how improving a function that cost us 18% of the time gave a 32% performance boost. Modern OOO CPUs are /very/ hard to profile.

The original code was micro-optimized for cortex-a8, without considering x86 performance. That micro-optimization also had a fatal mistake, forcing a float -> integer move. I remember writing this code and thinking “mnn this stinks, I’ll take a look at the generated assembly later”. As this code is run 1-10 million times per second even tiny improvements have a big effect on the overall performance.

So, do micro optimizations matter? Based on this example, only if you don’t make things worse while doing them. Looking at the generated assembly and benchmarking on all relevant platforms helps.loc